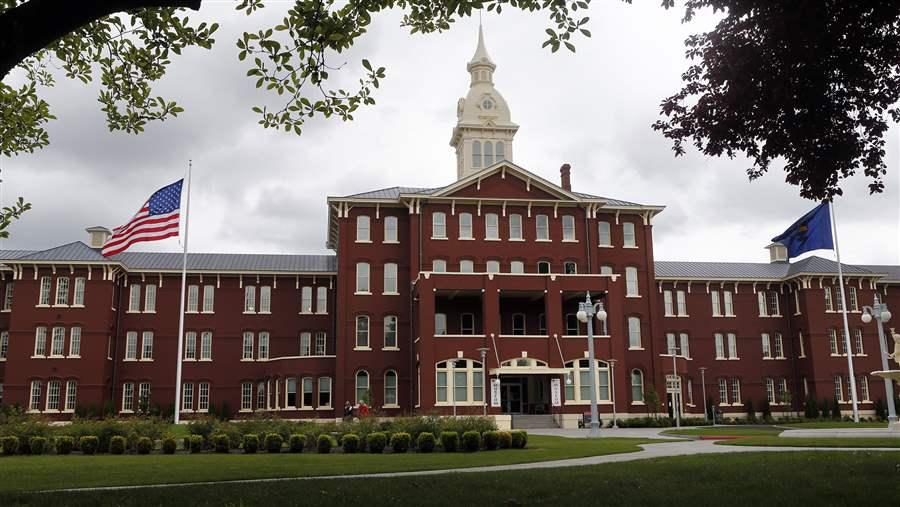 The historic Oregon State Hospital in Salem. Oregon’s model of intense care and supervision for the criminally insane is not cheap: Caring for a person judged to be guilty except for insanity costs between $383,000 and $437,000 annually, according to the Oregon Health Authority.

Editor’s note: Because of inaccurate information provided to Stateline, an earlier version of this story erroneously described the review process used by the Psychiatric Security Review Board. It conducts reviews every two years for hospitalized patients and every five years for those on conditional release.

PORTLAND, Ore. — In the midst of a harrowing psychotic episode in summer 2009, Annie broke into her ex-husband’s house and used a hammer and scissors to lay waste to plates, knickknacks, clothing, “and honestly, I don’t know what else.”

Had the mother of four, a retired captain in the National Guard, chosen to plead guilty, as a first offender she might have gotten off with the six months she’d already spent in jail.

Instead, she chose to accept the verdict of “guilty except for insanity” — Oregon’s version of the insanity defense. For Annie, who asked that her real name not be used because she fears being stigmatized, that meant accepting state supervision until 2029, when she will be 68.

She has no doubt she made the right choice.

“If I had been released with the hallucinations I had then … I wouldn’t be alive today,” said Annie, an outgoing redhead who during a recent interview wore a black blouse festooned with ladybugs.

About 14 percent of state and federal prisoners (about 200,000) and 26 percent of jailed inmates (about 190,000) have serious mental illnesses, according to a report last year by the U.S. Department of Justice. Prison and jail officials don’t have the resources to treat them, and many deteriorate behind bars.

By contrast, in some states those judged to be criminally insane receive better mental health treatment than practically anybody else — including people who have never committed a crime.

This is especially true in Oregon, according to the Treatment Advocacy Center, an Arlington, Virginia, nonprofit that advocates for those with severe mental illness.

Oregon’s Psychiatric Security Review Board oversees the care of the criminally insane from the time they receive the verdict until they are discharged from state care. During that period, which can go on indefinitely for someone serving a life sentence, the board supervises the treatment plan and determines when a person is ready for a less secure facility and, eventually, conditional release.

In Oregon, that final stage includes not just clinical treatment but supportive housing and help with job hunting, transportation, budgeting and grocery shopping.

“The amount of contact they have with clinicians and support staff is much, much higher than anyone in community mental health would get,” said Katrina Bennett, clinical director of criminally insane patients at Cascadia Behavioral Healthcare.

Cascadia provides outpatient mental health care to about 18,000 people a year in the Portland area. Among them are about 70 people found guilty except for insanity, mostly from the Oregon State Hospital in Salem.

Not many states match Oregon in caring for the criminally insane, according to the Treatment Advocacy Center. Only three states — Arizona, Connecticut and Washington — have a centralized authority comparable to Oregon’s Psychiatric Security Review Board.

Four states — Idaho, Kansas, Montana and Utah — don’t allow an insanity defense, so defendants with extreme mental illness usually are sent to prison instead of being hospitalized and treated. Others, including Idaho, Indiana, Massachusetts, New Mexico, North Carolina, Pennsylvania and Texas, do not have conditional release laws.

It has, however, yielded impressive results. Over the past five years, the rate of recidivism for those on conditional release in Oregon after a verdict of criminal insanity is 0.47 percent. By comparison, one report put the recidivism rate among all Oregon ex-inmates, whether mentally ill or not, at about 18 percent.

The irony of intensive care for the criminally insane is not lost on those who study the subject. “You shouldn’t have to be found guilty except for insanity to get high quality care,” said Lisa Dailey, the legislative and policy counsel at the Treatment Advocacy Center.

Across the United States each year, about 1,500 patients who committed felony crimes and were judged to be criminally insane are released from state psychiatric hospitals.

The criminally insane force states to perform a delicate balancing act. They have committed felonies, sometimes violent ones, so states are wary of returning them to communities where they might endanger others. At the same time, states recognize the responsibility to treat, rather than punish, those patients.

There is little data on recidivism among the criminally insane after they leave state supervision. But a 2016 study of Connecticut’s conditional release program, which is similar to Oregon’s, found that it lowered recidivism rates.

“Our mandate is to keep the public safe,” said Sid Moore, acting director of Oregon’s Psychiatric Security Review Board. “Comprehensive treatment that acknowledges their offense but also their humanity is how we maintain public safety.”

The stakes in getting it right are enormously high. In the past 18 months in Oregon, two men who were found guilty except for insanity and were eventually released were subsequently charged with murder in separate incidents. In both cases, the psychiatric board faced withering criticism for endangering the community. In response, the board added another layer of psychiatric review for those under consideration for conditional release.

Bobby, who was charged with a sex offense involving children he was babysitting, pleaded guilty except for insanity in 2008, when he was 18. Bobby, who asked that his last name not be used, said he’s been diagnosed with post-traumatic stress disorder as a result of being abused as a child.

After three and a half years in the state psychiatric hospital, which he described as torture, he was conditionally released and ultimately came to Cascadia, which provided him with clinical treatment, housing and other services.

On this day, wearing a hat from the Home Depot, where he works as a parking lot attendant, Bobby described himself as something he never expected he’d be: happy. He said he’s learned to control his behavior, particularly his angry outbursts. “I have a 40-hour-a-week job, a great relationship going on two years, I’m driving.

On a crisp morning last month, Oregon’s Psychiatric Security Review Board met on the grounds of the Oregon State Hospital, where “One Flew Over the Cuckoo’s Nest” was filmed. The board has 10 members, who sit in groups of three for hearings. On the panel were a psychiatrist, a psychologist and an attorney.

On the agenda were several cases of people requesting to move from the hospital to conditional release, or even complete discharge. The patients all had a state-appointed attorney, and the state was represented by an assistant attorney general. 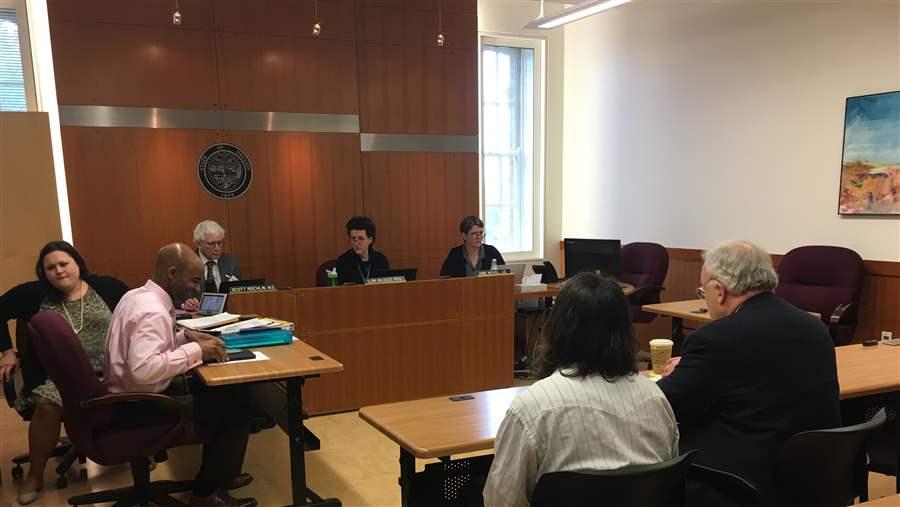 Three members of the Oregon Psychiatric Security Review Board (back) take testimony about releasing patients hospitalized as criminally insane.

Hospitalized patients and those on conditional release can ask for a change in their status once every six months. If the patient makes no such requests, the board reviews the status of each hospitalized patient every five [change to two] years and every two [change to five] years for those on conditional release. The board considers the mental status of the patient, the seriousness of the crime committed, and the risk that the patient might harm others if released.

One case this morning involved a young man with shoulder-length dark hair and glasses who had landed in the hospital after robbing cigarettes from a convenience store claiming — falsely — that he had a gun. A hospital psychiatrist testified to the board that the young man, diagnosed as bipolar, had cooperated and was engaged in his treatment.

In requesting a conditional release, the 22-year-old told the board, “I’ve really worked on my impulsivity, and my substance abuse issues I’ve gotten a handle on.” He said he had improved insight into his mental illness.

But the prosecutor, in questioning the witnesses, brought up two incidents. The young man had broken his glasses and smashed his hand into a suggestion box when nurses wouldn’t permit him to smoke. He’d also hatched a scheme to assault another patient in the hopes that patient would kill him.

After a brief consultation, the board returned and the chairwoman told the young man his request was rejected. They wanted to give his new medications more time to work and to see how he did when given privileges, such as trips away from the hospital. “This is what we think is in your best interests,” she said. “Keep up the good work.”

On this day, the board rejected all requests for a change in status. And it revoked the conditional release of a patient who appeared to have stopped taking his medications.

Patients from the Portland area who are on conditional release most likely have received services from Cascadia. Unless approved to live on their own or with family, they are assigned housing, which entails various levels of security and staffing. Many live in group homes in neighborhoods around the city, some with staff on duty 24 hours a day.

Each patient has a program of clinical treatment, most of it at a Cascadia facility in southeast Portland, the Hope Center. Patients are required to participate in at least 20 hours a week of structured activity. For some, this can be work, school or volunteering.

For others, it’s group sessions, which might be devoted to life skills such as good hygiene, how to ride a bus, how to open a bank account, and how to shop for groceries. There are addiction and anger management groups. There are also painting, writing and recreation classes.

A treatment team monitors each patient’s progress. Case managers carry about a dozen cases at a time, lower than an average mental health case load.

Annie has progressed to what is called semi-independent living. She lives in a group home where staff is on duty eight hours a day. She is driving again and owns a car. She sits on the board of a community organization that provides peer support for those in recovery. She plans to pursue a master’s degree in counseling.

But she has no plans to request a discharge from state jurisdiction.